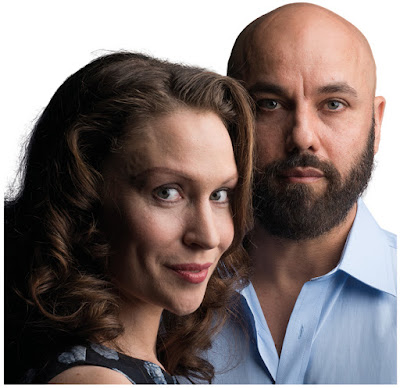 ODD MAN OUT, is a new Australian play, by David Williamson. The play explores a relationship between Ryan (Justin Stewart Cotta), a 'numbers' genius employed and paid well by a Big Bank for his skills, who suffers from an undiagnosed case of Aspergers' Syndrome and Alice (Lisa Gormley) a 38 year old physical therapist counting down her fertility clock with some urgency.

We watch Ryan and Alice meet on a bus (what he is doing on bus, with all his social phobias and owning a 'flash' car, I couldn't work out). Arrested by the attention paid to her by her near-by co-passenger, Alice (in Wonderland?), is swept off her feet and within a ten-minute conversation accepts an invitation to dinner. Fine food, cultural explorations, daily flowers become part of Alice's new whirl, over the following weeks, months. The intensity of Ryan's attention knocks this therapist completely off kilter because she does not seem to be able to see, to read, the physical or verbal/emotional symptoms that Ryan exudes, as a warning sign or that this relationship is, consequently, possibly, going to be fraught, difficult. Alice, will not or cannot hear her family and friends disquiet after several disastrous social interactions with Ryan. Instead, fairly quickly, within months, Alice gets herself married and ensconced in a loft apartment with Ryan, which he insists on renovating. Ryan's gift-wooing technique and the urgency of her want of a child seems to have disarmed all cautions from her reasoning. Her own psychological trait, which her mother reminds her of: a need to care for the 'injured bird' - she seems to have had a history of collapsed, ill-judged relationships - hardly gets a look-in as a subject to be developed in the dual responsibilities of the ups-and-downs of this relationship.

The play begins and stays as a direct conversation guidance with the audience through the experience of Alice as she recalls her incredible (and, I, essentially, found it very incredible) journey. The play devolves into a kind of tutorial or a Cert IV qualification class on how to assist an individual suffering  Asperger's Syndrome to integrate into 'normal' social interactions. We even get the presentation of colour-coded cards stuck to a wall as we are taken through a how-to help sample. It is almost as if Mr Williamson in research for another play has googled Asperger's Syndrome and has hung his writing around that research with little time for real dramaturgical sophistication of character motivation or backstory. Alice even, talking straight to us, recommends a book and author to look up if we are really interested to know more about the treatment of the Syndrome. I waited with bated breath for a 'Further Reading…' recommendation from her, during the play.

Mr Cotta and Ms Gormley are essentially the two hour play and they are very committed to what they have been given to work with. Mr Cotta has all the external symptoms down pat, obviously so - why Alice didn't notice, Ryan's physical characteristics and verbal/emotional tics, as we all in the audience did, and not register caution, perhaps only a psychiatrist could illuminate - and, on the night I saw the play Mr Cotta tended to overplay every choice, particularly the big emotional melt-downs - his behaviour was hard not to notice. Ms Gormley given Alice's biological need for a baby (I'm 38, tick, tick, tick…) by Mr Williamson, as the principal motivation for her need for this relationship to survive - although the luxurious life that Ryan could and did supply, surely, was a temptation to justify her staying the course and returning to it after a separation, I thought - does as best she can with her natural charm to have us, even through an interval, to bear-up and stay sympathetically with Alice - it is a hard call!

The other actors, Rachel Gordon, Matt Minto, Bill Young and Gael Ballantyne, play the other characters that are written hardly beyond 'functional' tools for the storytelling . These actors have charm and theatrical 'savvy' and, so, do well - or, as best they can.

Ryan, with his propensity to think through every social situation logically with no comprehension of ordinary empathy causing social combustions of an outrageous kind, caused much mirth from the audience. I imagine it was funny for all except those of us who have dealt with this personality problem, first-hand. They even sat through the therapy class/tutorial with attentive patience and laughed at Ryan's growing 'frenzy' - the Ensemble presented this kind of 'educative' play for its audience last year with e-baby and maybe believe that it is a formula-for-playwriting that is a box-office 'goldmine'.

ODD MAN OUT, in its aspirational dramatic formula, reminded me, some, of Mr Williamson's THE JACK MANNING TRILOGY. The best of those plays was the first one, FACE TO FACE, and ODD MAN OUT does not display anywhere near the sophistication of the dramaturgical structure and insight into his characters conflicting motivations, that was in that play, written in 2000. ODD MAN OUT 'feels' to me as an early-draft of an interesting and concerning medical dilemma, worth examining. The play needs work, lots of it. There is a reference to the 1988 film RAIN MAN, with Dustin Hoffman and Tom Cruise, but Mr Williamson does not reach the subtly of that commercial screenplay (written by Barry Morrow and Ronald Bass) to capture us, uncritically.

Mark Kilmurry, Directs efficiently. Design by Anna Gardiner is abstracted with a quasi brain x-ray pattern on the back wall and six multi-coloured illuminated, portable boxes serving as the furniture - simple and adequate. The costume solutions are spare and, too, simple and nearly adequate (Renata Beslik)

You know and I know that David Williamson is one of Australia's great writers. ODD MAN OUT is not one of his great plays. If you are intrigued by Asperger's Syndrome, perhaps, just google it, or, watch RAIN MAN.
Posted by Editor at 9:04 PM