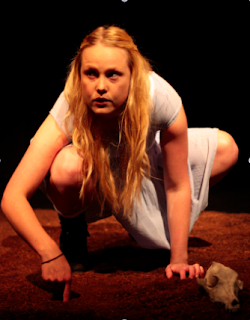 PICTURES OF BRIGHT LIGHTS by Maree Freeman, presented by Little Ones Theatre in association with Tamarama Rock Surfers Company at the Bondi Pavilion Theatre.

PICTURES OF BRIGHT LIGHTS is a new Australian play. This work was one of several works that emerged from the new NIDA Playwrighting Course (one year full-time) in 2010 and now has been curated by The Tamarama Rock Surfers Company with Little Ones Theatre as part of the inaugural Bondi Pavilion season.

A mother (Caroline Craig) and father (Kurt Phelan) have a daughter (Eryn Jean Norvill). The family lead a normal routine life: packing Dad’s lunch, sending him to work, then beginning and organising the daily chores with expressions of affection between mother and child. It is on a loop of habit and usual expectation. Prettily dressed (Design: Anya Tamsin) with simply choreographed stylised gesture (Sam Chester) it all unspools gently, even, surrealistically.(the look brought for me, the world of Gary Ross’ 1998 film, PLEASANTVILLE to mind).

The child/daughter becomes entranced “when a strange carnival appears in their front yard and a story teller (Kurt Phelan) unearths the town’s dark secret.” The young girl child digs in the earth around the town and finds, words. These words when put together in different configurations open a world that is different to the usual state of ‘being’ that she knows and we watch the loop of the family, especially between mother and daughter, slowly expand and warp. Like Lewis Carroll’s Alice, the Child begins adventures. The relationships shift and change, especially between mother and daughter and the hormonal displacement and growth between generations appear. The daughter discovers language and with the encouragement of the storyteller develops an independent world viewpoint that is much broader then her home base: “The Story Teller’s eyes glinted in the moonlight and the gleam from the Ferris Wheel reflected off colours of his coat. It looked like an orchestra of fire-flies dancing the tango across his chest.” She had seen nothing like this before. The ties that bound the family habits dissolve and the daughter finds independence and the mother and father find a new way of being together. Each dances into a new ‘loop’, further into their own journey.

Of course, this could be read as an autobiographical referencing of Ms Freeman’s discovery of her writing talent and the way that it may have shifted her into this ‘shamanistic’ gift that separates and distinguishes her from her origins – her ‘ordinary’ family and their routines. The journey of all artists when their gift is found and nurtured. The difference of the artist to the rest of us.

Simply told and maybe, a little too tightly controlled by the director, Stephen Nicolazzo, the overall effect of this short 55 minute play is one that permits delicate entrancement. This is certainly an ‘art’ project and requires a patience and application of thoughtful solving, during and/or after the performance. All three of the performers give a concentrated and committed, lovingly concocted physical and vocal life to the world that Mr Nicolazzo and Ms Freeman have invented. Ms Norvillle goes through the greatest arc journey and is mostly impressive with her emotional expression. The Sound design by Nate Edmonson is alluring to the mood of the piece, even if I felt the Nina Simone moment was a little heavy handed for the delicacy that had gone on before.

It is interesting to put the recent production of another new Australian play at the New Theatre last month, DIRTYLAND by Elise Hearst, side by side. Both by women and both, maybe, uniquely, demonstrating a contemporary female approach to a dramatic writing world view. Both plays have no real 'plot' as such, and in my experience of them, an existence in the theatre space that requires circumspection and breath to absorb and solve. Poetry and intensely visual, almost installation-art qualities, dominating, necessarily, the audience’s sensibilities, if the most is to be gained from the work. There are no easy answers to what is going on. Is there something going on? Is it a way of using the theatre medium in a new delicate manner that is absent of the usual old patriarchal/masculine view of how to write story and present an experience for an audience? A quiet revolution?

Just a reflection, I have had.

This work is attractive and interesting, but for the curious artists amongst us, not a usual evening in the theatre. Sign of the times? Certainly the majestic ocean from the verandah/deck of this theatre had greater poetic scope in my mind afterwards. Brave to curate in this space, and a definite statement as to real and thoughtful values of the possibility of contemporary theatre. One can only hope the Tamarama Rock Surfers can find the right support from audiences to continue this wonderful, problematic enterprise, in this mode.

I see they have curated an old 1930’s melodrama, ROPE by Patrick Hamilton, (he who wrote GASLIGHT, as well – ah, Ingrid Bergman and Charles Boyer, where are you?) for next on the bill at the Pavilion. I anticipate a delightful change of pace and style. Let us hope it is not too ‘artful’ as to discourage people from not wanting to just rent the Alfred Hitchcock version for a cosy winter’s night at home instead. A thrill in the theatre with good old fashioned suspense might just encourage an audience out.
Posted by Editor at 8:33 PM