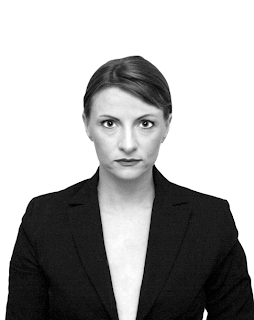 Mike Bartlett is a young new British voice (b. 1980) who has just had a major breakthrough at the National Theatre this August, 2010, with a play called EARTHQUAKES IN LONDON. Enthusiastic reviews about a play concerning the environmental condition of the planet. Up till then his work has been small but intense plays at the Royal Court. CONTRACTIONS is a re-write of a radio play, called LOVE CONTRACTS. Is this his debut in Sydney?

This is an intense 60 minute two hander – a black comedy. The comedy erupts, mostly, out of its outrageous, audacity of a scenario. Beginning in an ordinary way and subtly escalating to workplace terror and horror. Two women in a corporate office situation. This corporation has a policy handbook and set of contracts for its staff that is minute in its personal concern (and invasion). Every aspect of control over ‘output’ of the staff to achieve the corporation goals is documented and scrutinised and signed off on. Definitions of romance and sexual relationships become a threatening and frightening weapon of management. Secrecy and unfeeling automaton response is de rigueur. Fear, gobbledegook language, and emotional bullying – the blunt tools of control. A contemporary version of the world of Orwell’s 1984 screwed to a level that is way, way over the top but feasibly possible. The audience rippled uncomfortably with recognition and gasped at the demands made by the Manager (Sarah Loxley) on her employee Emma (Viviana Delgado) and laughed at the next increasing, incremental control screw that was just this side of absurd. It is all awfully possible. Those of us inside the contemporary world of Corporate and Government compliance requirements recognise the language and situations all too familiarly. It is an anxiety comedy. Well written.

This company directed by Christine Greenough are comfortable and clear. Ms Loxton, reptilian in her control, unafraid to play the corporate monster to the hilt. Trousered and jacketed and anal in every aspect of her dominion: space, tools and staff. Viviana Delgado begins femininely in dress and cardigan and progressively moves to end in a trousered appearance – beaten into the cog in the corporate wheel that turns everything to profit, a facsimile of the corporate model presented by example in the Manager. The Design is the best that I have seen in this space, white grey and gleaming steel furniture and venetian blinds. The lighting, within the limitations of the equipment, well employed.

A very short season by the Occasional Creative Company - a company of professionals dedicated to find the opportunities to create in and about their ‘real’ lives of responsibilities. Extremely creditable work, exposing a very interesting writer to and for Sydney audiences.
Posted by Editor at 10:11 PM