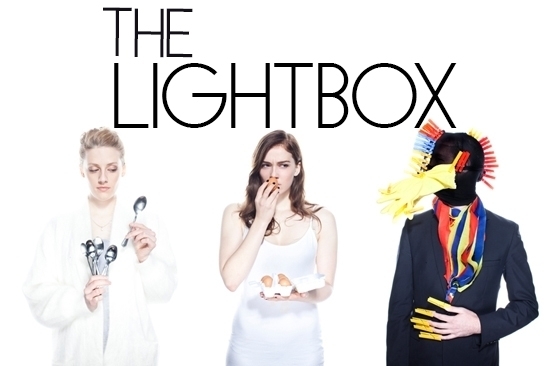 Fat Boy Dancing and we do not happen present, THE LIGHT BOX by Natalia Savvides at 107 Projects - 107 Refern St, Redfern.

Natalie Savvides is an emerging Australian playwright and she writes to us in the program:


THE LIGHT BOX is a play inspired by my research into the experiences of women in colonial asylums. As the play grew over the course of two developments led by James Dalton, the characters seemed to take on lives of their own, and more fantastical elements emerged. When a man made of spoons and a toucan walked onto the page, and a cruise ship docked in the Panama Canal, I began to realise the play was taking on a new form.

The language, the form and the characters in this strange dream-like/nightmare-like journey are especially arresting. The images conjured by Set and Costume Designer, Dylan Tonkin, encourages us to be transported into a world that is delicate and magical in its affect: hanging, white cut-out birds in flight - both passive and aggressive in frozen expressions - drift up and down around us - and the appearance of a character made of spoons with the jangling dissonance of that possibility, or, of a vast black-winged 'toucan', are wonderfully realised.

The company of actors are present, when we arrive in the space, and stay all the time, so we are witness to the many changes of place and costume and it has been integrated, seamlessly, into the action of the production by Mr Dalton, as part of the audience's participation, commitment, to the storytelling. This directorial technique invites our empathy. The simple, colour-filled lighting design by Benjamin Brockman adds to the magic-realism of the experience, supported by a very superior and beautifully atmospheric composition/sound track by Nate Edmundson. Its detail is wonderous.

But, for me, the inspiration and aspiration of the work was undone by the vocal work of the actors: they're failing to reveal the text and story with any insightful craftsmanship of voice - it appeared to be very under-supervised by Mr Dalton. Of the four actors, only Dean Mason (Cleaner/Toucan) seemed to have the measure of the dangerously resonant sound reverberation of the room/theatre, and the only one who had seemed to deal with the language provided by Ms Saavides with the proper regard for a word by word savouring to reveal the information in the line with the proper poetics of sound, to help us invest in the full hour of the work. It is an ironic virtue for Mr Mason as  his character is in the least need for the poetics.

Stephanie King (Annie/Lesley) and Tom Christophersen ( Spoons/Lenny/Cyril) carry the responsibility of several vital characters and the speed and volume with which they execute the words, and the emotional layering on/of the words, in their performance, often buries the possibility of clarity of most, of what I suppose, is, revelatory content: add truly superficial characterisations and almost insurmountable obstacles for my, and other audience members, engagement results. After the curtain call there was much befuddled discussion. Neither, Ms King nor Mr Christophersen, seem to have the technical awareness to deliver the demands of the writing that Ms Savvides has/is evolving.

Hannah Barlow (Ethel), differently, but similarly, fails to use the articulation of her work to project the character in her charge - an internal acting of mood dominates her choices - soulfully physical in gesture and it, in this language based creation, is the strongest impression of her characterisation - her language/text usage is too secondary to her communications skills for this work.

Accumulatively, then, belief, even understanding what was happening, despite the visual atmospherics of the production, were kept at bay.

If this presentation at 107 Projects is just one more step, and not the last, in the evolution of a THE LIGHT BOX, much potential is shown. The flaws in the acting, at the moment, prevent the other creative inputs to transcend into an immersive experience in the theatre, as yet.
Posted by Editor at 7:20 PM