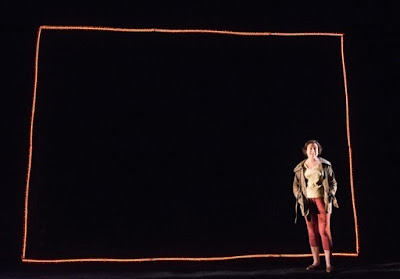 An elderly woman, a Mrs Jarrett (Lindsay Barrett), looks at us and says: "I'm walking down the street and there's a door in the fence and inside are three women I've seen before." and she goes in. So, we spend an hour with three old, comfortable friends, Sally (Deborah Findlay), Lena (Kika Markham) and Vi (June Watson) and a neighbour on a summer afternoon on a small grassed backyard lawn having tea in rickety chairs.

Caryl Churchill's new play, ESCAPED ALONE, introduces us into the everyday conversation of four women who have lived a life, they are in their 70's, and have 'wonderful-bizarro' stories to recollect and ruminate upon, whilst living and quietly coping with the changing world about them. Sally has a detailed phobia about cats that possesses her and helps distract her. Lena suffers from depression - maybe agoraphobia - that possesses her and helps distract her. Vi who spent six years in prison for murdering her abusive husband in their kitchen, is now coping with the real horror of the incident, of having lost contact with her son - a circumstance that possesses her and distracts her. While Mrs Jarrett with the outward appearance of the acceptance of the ageing process - "two new hips" - reveals, simply: "Terrible Rage terrible rage terrible rage terrible rage terrible rage..... " She is not distracted at all. They all chatter relatively peacefully without overt rancour, and they even have a reminiscing interlude when they spontaneously sing a pop song from their days of youth (Da Do Run Run - 1963, Crystals). Nostalgic. Charming. Delightful.

All of this takes place in a hyper real suburban backyard, Designed by Miriam Buether, lit with a changing daylight intensity by Peter Mumford. It has the feel of a comfortable theatrical presentation of a reality, that is so hyper that it is obviously not real - and like the conversation of the women has the sub-conscious effect of a vibrating tension of dis-ease.

Between each of the eight overheard episodes of tea and sympathy, Mrs Jarrett steps down onto the edge of the stage and backed with a visual void of infinite blackness, framed by a glowing rectangular of orange light bulbs, tells us, directly and unaffectedly, of a cataclysmic imagining of a world of the future:


Fire broke out in ten places at once. Four cases of arson by children and politicians, three of spontaneous combustion of the markets, two of sunshine, one supposed by believers to be a punishment by God for gender dysphoria. It swept through saplings, petrol stations, prisons, dryads and books. Fires were lit to stop the fires and consumed squirrels, firefighters and shoppers. Cars sped from one furnace to another. Houses exploded. Some shot flaming swans, some shot their children. Finally the wind drove the fire to the ocean, where salt water made survivors faint. The blackened area was declared a separate country with zero population, zero growth and zero politics. Charred stumps were salvaged for art and biscuits.

This gorgeous prose/poetry of a relentlessly grim imagery, cascades from Ms Churchill through Mrs Jarrett in a winning matter of fact way, mixing environmental disasters, evolving grotesqueries of biology and everyday familiar details of a world far more intriguing and frightening than anything that the apocalyptic film BLADE RUNNER, had ever imagined or intimated a possibility. But then that film's graphic imagery was made in 1982. Ms Churchill's play is of now, 2016. Time and man's abuse of the planet has moved on. 34 years. Only 34 years.

Mrs Jarrett having had her tea and camaraderie with her neighbours, stands up and says to her neighbours: "I like it here" (Afternoons like this). Then she steps out to the edge of the stage and says to us: "And then I said thanks for the tea and I went home."

This play and this production, Directed by James Macdonald, is beguilingly subtle, brilliantly acted by all four of the women. It all felt, as an experience, straightforward and easy, but in its immediate aftermath devastating and enormously disconcerting. The dark punch of a dystopian future of real terror lit quietly a fear and a rage, a terrible rage. The impact of watching these four aged and marinated-by-life women sitting in a backyard just like mine  - all recognisable from my own life - gently, laterally, bringing tea and catastrophe into my consciousness, had me transported into a place of real wonder.

A black, fear filled, fearful comic jewel. And, still, I felt that I had had a miraculous time in the theatre.  A quiet sense of a kind of happiness despite the weighty sadness of the future. Ms Churchill just seems to get better and better.