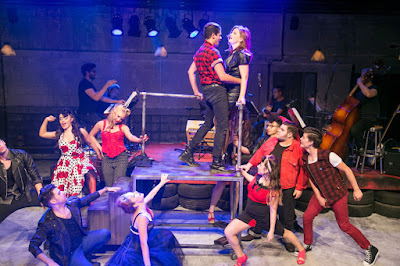 THE ORIGINAL GREASE is a return, from the Broadway and 1978 film "bubble-gum" version of GREASE, to the roots of the original invention of the writers, Jim Jacobs and Warren Casey. Its reconstruction was made in 2010 via a collaboration with PJ Papparelli of the American Theatre Company in Chicago and GREASE author Jim Jacobs. Director, Jay James-Moody writes in the program, that the show  "…was conceived as an authentic rock 'n' roll-infused teen drama that depicted the gangs of Chicago's rough, working class northwest side. They smoked, drank, swore and had sex - only occasionally with rubbers from a vending machine. ... THE ORIGINAL GREASE is grimy. The characters are sexist and racist without malice, but as products of their time and upbringing."

So, in the changes, here, in the Reginald, we get a language that is cruder, maybe more real, both in the content dialogue and lyrics to the music. We get some new songs to replace some of the ones we know as part of the GREASE that has become 'the word'. The experience becomes a win some, lose some occasion.

There is a band of six musicians, and the 17 members of the acting company all get a solo song (I think), along with chorus tasks. It is a nearly 3 hour show. Everybody sings well. Everybody dances really well. The choreography by Simone Salle is inventive, highly energetic and wonderfully executed. The acting, however, is not always consistently good enough and becomes the show's weakest link for the audience to be able to sustain a high interest, in this episodic work. This show has a company of performers ranging from veterans (two of them) to recent graduates from institutions such as the Western Australian Academy of Performing Arts (WAPPA), the Australian Institute of Music (AIM) - a lot of them - even one from the National Institute of Dramatic Art (NIDA) - some of them making their debut performances, some still presently students studying their music theatre course. In fact this show sometimes feels like a graduating show at one of those schools. Nothing wrong with that and maybe that is just an impression urged because of the necessary youthfulness of the cast.

I liked most of the singing, the acapella songs, not always successful. Performances I noted were Coral Mercer-Jones as Rizzo (if sometimes, too Musical Theatre sharp-edged); Daniella Mirels, as a delightfully believable Frenchy; Temujin Tera, as Kenickie; Ric Herbet, in a number of vignette guest spots, but, especially sharp, as the Radio Voice - impersonation, voice and body super fun.

Everything is done well by the usual Squabblogic team: The Direction in the ever capable hands of Jay James-Moody; The Musical Direction, by Benjamin Kiehne (not his usual standard); Brendan Hay, Designing the costumes with great panache; and the usual visual flair of Georgia Hopkins with a wide open set, surrounded by a painted wall of a pleasing easeful 'aesthetic arrest', with an inventive set of rolling platforms, that can double as many things, that create an ample fluidity to the events of the needs of the many locations of the story. The Lighting Design, by Mikey Rice has the flexibility required, but the Sound design, by Jessica James-Moody, with everyone 'miked', does not facilitate an ease for the audience to locate who is speaking or who is singing, often for several beats - it is a tiresome effect. One wonders, in this small space, what the real difference would be without it. It does not allow for easy suspension of belief. It is, in this production, a de-focusing agent.

THE ORIGINAL GREASE is for musical theatre geeks, I guess, much like Squabblogic's choice with TRIASSIC PARQ. One can take in this show and have good time, but it is not an essential one to catch if you have other choices for your time, especially if you're a 'non-geek' musical theatre experience 'collector'.
Posted by Kevin Jackson at 11:47 PM