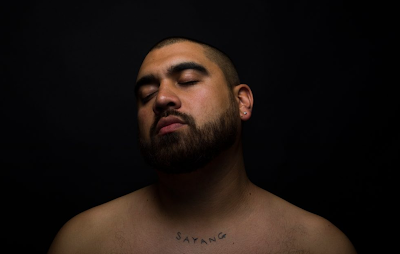 In this memoir monologue performance he is a brown man in a black country talking to, mostly, white people, about how he has felt - feels - stigmatised as being 'unAustralian' for most of his life.

SINCE ALI DIED is a Memoir Monologue, originating from a young man who has a Muslim Malaysian father (Borneo) and a white Australian mother (European - Dutch origin) who grew up within the reaches of Queanbeyan, a small, country city not too far from Canberra , the Australian capital. Written in poetry and rap song rhythms, in it we meet characters that have had meaning in his life: Muhammad Ali, Omar's father and mother, Danny, his best mate, and Jamilla, a girl capable of awakening a passion that startles and confounds him.

This is my second experience of this work, the first being at it's premiere season, also at Griffin, in 2018. SEDUCTION is the word that dominates my feelings.

Firstly, seduction by the sheer physical presence of a performer that has a charismatic, magnetic charm that is beautiful, tender, raw and gritty. A voice of resonant sounds and eyes that tell of communicative trust. The work seems to be fuelled by anger in search of redemption, not just for himself, but especially for others of his 'world'. It has an anger and a melancholy, and an intelligence sifted by the fine netted lines of life experience and formal education to a vulnerable compassion for the human condition, that embraces the marginalised, and attempts to bring them into the realm of consciousness for the other, bigger world to understand, by looking at the 'dark heart of things' that occupy the flailing human lost - what some may call 'losers'.

Secondly, seduction by a language usage that has a mellifluous texture of deeply considered choice that reveals and exposes a love of country and people that makes one weep at its beauty and aptness. Words, language, that has a simple sophistication that reveal the contemporary Australian landscape, persona and temper in a way that quietly supersedes all the past imagery delivered to me by other poets - past and present - reflecting on what it is to be an Australian in the natural and political landscape that has been, is, essentially hostile to his presence. A truthful, young voice emanating up from a multi-cultural crucible of hard living and observation that I recognise as an authentic voice, whether it is rendered in pure poetry or in the world, international rhythms of the hip hop, rap slam poet. It is ecstatically wonderful and sometimes unbearably incendiary.

SINCE ALI DIED is a performance memoir that wants you to understand and so sits for too long in the acceptable zone of relative non-offence as a soft confrontation - he does not wish to alienate you in any way. Omar Musa's 2014 novel: HERE COME THE DOGS goes deeper into the 'dark', and with its flaws takes us into the dark night of a soul, that has one fearing and anxious for its survival. If performance work in the theatre is going to be a continuing source of 'reaching out' from Mr Musa, then it needs to be braver in revealing the truths of what he knows. It needs more risk, the risk that great artists take when they feel the impulse to write and reflect the world that they know for the others, that ought, need, to know of it. All artists are 'possessed' and are held, always, in a titanic grip of the need to express itself, a grip that squeezes the artist tightly, and causes pain, but it is a pain that can be cathartic and redemptive for the writer and for his audience - it is too, necessarily addictive. All the great writers suffer to create for us less blessed souls.

I have been in awe of Mr Musa's gifts and have been an advocate to encourage you to witness this artist and hear his gifts. SINCE ALI DIED, in my second experience was a less emotional experience but still as mesmerising, as seductive in his radiant presence and in his sublime use of contemporary Australian language and modes. You will not go unrewarded - DO GO and encourage him to persevere with the challenge of his gifts. We need them and him.

The work, this time, has a guest artist: vocalist, Sarah Corry, and is Directed by Anthea Williams.
Posted by Editor at 8:19 PM