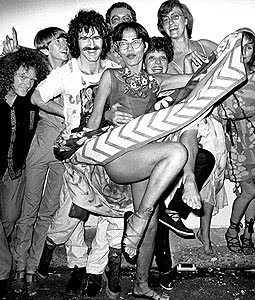 William Yang has been taking photographs for a very long time. He has had many exhibitions of his work, the first, SYDNEYPHILES at the Australian Centre for Photography in 1977. He has had several books of his works published (I have three of them: Sydney Diaries, Sadness and Friends of Dorothy). MY GENERATION is the tenth full-length performance piece by Mr Yang. They have toured Australia and International Festivals. He is the most internationally toured Australian performer.

Two large screens at a slight V-shaped angle to each other dominate the space. To the audience right, a music stand laden with instruments awaits the musician Daniel Holdsworth to appear and make, subtle contributions as background and sometimes foreground sound/music for the images of Mr Yang. His performance gives added depth to the evening.

Demurely, quietly dressed, conservatively in a suit and tie, Mr Yang begins in a sub-dued light, centre stage, a presentation of selected images from his long career as a photographer of Sydney society and social events. (Production Manager, Gordon Rymer.) In this case a very personal memorabilia of the people close to him in his time journey in a very close circle of friends/fellow travellers.

It is an intimate experience and depending on one's age it is either 90 minutes of nostalgia and/or reflection or a gentle education into the "underground" and not so underground personalities and events of the recent past that have been significant and contributory to the "world" of Sydney as we know it today. It is a significant document for all parts of the community but very relevant to the Sydney Gay and Lesbian community. It reflects a time when the right to express oneself as the authentic self, in the public domain was still an aspiration and not a part of life as we know it, for some minorities today. It was, as the performance registers for us not without cost. The 2010 Sydney Gay and Lesbian Festival has as its theme THE HISTORY OF THE WORLD and this performance is particularly apt.

Watching the images of many people over almost four decades of time has the frightening rapture of having the Dorian Gray portrait in the attic in front of you. The glories of the youthful hopes and sense of joy in the 1977 images and the gradual wearing to the alternate beauty of old (r)age, sometimes redolent with wisdom and knowledge, sometimes with grief, confronting you from the stares into Mr Yang's camera lens is a powerful dose of the palpable knowledge of the usage of Time on ourselves.

I first met Mr William Yang at NIDA, in 1970, where he begins his raconteur's journey this time. I knew him at first as Willie Young. He was in the Jane Street Season and part of the company curated by John Clark and Elizabeth Butcher that gave us THE LEGEND OF KING O'MALLEY , which he mentions, but even more memorably 10,000 MILES AWAY, directed by Rex Cramphorn. Since, of course, I have crossed the path of the photographer at many of these recorded events and am glad that the eye of the artist as captured and now curates some of my past brushes with fame, for I am of the MY GENERATION that Mr Yang has captured in time and now celebrates. The eye of this voyeur is rich in its generosity for sharing the times of our lives with us in so candid and naked a way.

If you have a chance, catch this performance. It is not revolutionary. It is not startling. But it is full of history and gentle love. Every Sydneysider should look and learn about an "underbelly" of Sydney that you will probably never see on prime time television, that has really changed and shaped the world we live in, I with great prejudice, believe, for the better.

Playing now until 6 March.
For more information or to book click here.
Posted by Pearly Productions at 8:17 PM