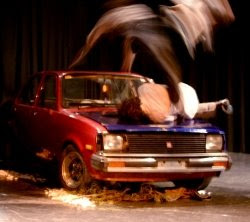 When you enter the Space in a surround of black clad walls sits a red car just stage left (audience perspective) of centre. Up stage right is a telephone box. Used tyres and tree branches are heaped up in downstage right corner. The lights dim, we hear the beginning of morning birds waking and occasionally twerping. The inside of the vehicle lights up and we see a man and a woman inside. The woman sleeping. What follows is a detailed enactment by the man in attempting to start the car, it responds with unhealthy noise and smoking exhaust; the man dealing with the engine to attempt repair, searching the boot of the car, drinking water, stretching, listening to the sounds of the surrounding nature and attempting to use the telephone to summon help – all to no avail. Stranded in the middle of nowhere. Finally, the woman wakes and there begins a game of mutual ”childish” seduction by both in this empty roadside space that finishes with the two of them having exciting and abandoned sex in the body of the car. It rocks on its wheels, the country and western radio station blurts accompaniment, the interior lights pulse and flash then a strange figure appears at the back of he car in the red stop lights and slowly begins to make his presence aware to the sexually excited couple. The danger and the fear of all those road movies set in the Australian outback (WOLF CREEK-“Just a head on a stick!!’) and the real life cases, The Falconio tragedy come creeping into the experience of watching.

‘roadkill’, then explores other fearful “myths” ( I want to say Urban myths, but urban isn’t quite right) of back road travel in the great outback. It moves from the long naturalistic, real time telling of the opening (unbelievably stressful to sit through because of the extended use of time) to more surreal but no less memorable vignettes of scenarios and possibilities that might appear and resolve themselves in the given circumstances of the bush breakdown, so eerily set up by the design, Lighting (Mark Howett and Bluebottle – Benjamin Cisterne) and a truly moving Composition & Sound Design (Luke Smiles / motion laboratories). A terrible speeding car and road crash that finishes in an astonishing slow motion concussive flinging of bodies in the interior of the car; an amazing gut wrenching slow motion spin out in the phone box as if time was suspended and excruciatingly observed; a hail of rocks, clamouring down on to the car and finally a pelting of stones seemingly blown by an angry nature at the prone body on the floor of the road. Much else occurs.

This work has been choreographed by Splintergroup and is this company’s second work and “after the success of ‘lawn’ (seen at the Sydney Festival two years ago)… decided to try again and make a piece that dealt with a peculiarly Australian sensibility……’roadkill’, like ’lawn’, deals with isolation and alienation but turned on its head. Instead of the claustrophobia of a Berlin apartment (they) attempted to create the agoraphobia of the Australian desert” They have succeeded mightily. It is, mostly, a very visceral experience.

The choreography and the physical feats of the three dancers / performers are truly arresting in their athleticism. Gavin Webber, Grayson Millwood and Sarah-Jane Howard. The duet between the two men is startling in its seeming defiance of gravity (it seemed paper light and with no hands) and similarly, Grayson Millwood’s dance in the telephone box is breathtaking for its beauty and demonstration of strength in a mesmerizing trick of the appearance of the absence of gravity. Ms Howard and Mr Webber are also marvellous to watch together and solo.

The dramaturgy (Andrew Ross) and the attempts to ”find ways to make an edit on stage, how to do a wipe, crossfade, a snap” were not always coherent or comfortable. The work for me at its worst could have been read as “Here are some set pieces and props, what physical tricks of mine can I demonstrate, using them?” The work had a stop/start feel that disjointed the experience for me. The continuity was puzzling. In retrospect I may appreciate the objectives more, but while watching it, I sometimes lost belief and concentration. I spent sometime wondering how some of the work was been done technically. I also felt, like ‘lawn’, it was just a little too long. Some tightening, editing of the material, maybe.

Still this is very interesting, arresting and extraordinary work. In the program “manifesto” it says “Splintergroup is a way of working, involving a spirit of collaboration between performers, designers and artists, resulting in a work that incorporates different visions into a single, unified production. Both ‘lawn’ and ‘roadkill’ were created with this method. Splintergroup is one of three companies - in residence - at Brisbane Powerhouse.
Posted by Pearly Productions at 7:08 PM