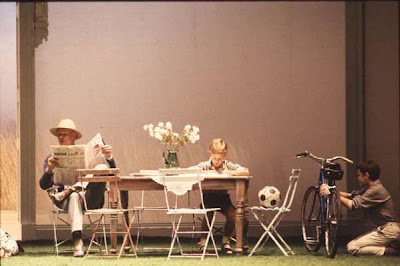 I love French Opera music, (the little that I know): Offenbach, Gounod, and Massenet. I have fond memories of Massenet’s CENDRILLION which I saw In San Francisco with Renee Fleming way, way back then; and only a month ago at the Chauvel Cinema I watched a screening of THAIS, again with Rene Fleming plus Thomas Hampson, from the glorious series of the present season of the New York Metropolitan Opera. (By the way, worth catching, if you love the opera and theatre. With some qualms sometimes about production etc. But this IS the present season of opera in and one has a bird’s eye view of some of the great contemporary singers and the chance to see and hear work that stretches past the OA repertory. I can have very up to date chats with my aficioandos.)

The libretto is “after Goethe’s Die Leiden des jungen Werthers” and according to the program notes is very “after”, in the freedoms the librettists took in adapting the piece. However it is very “Romantic” with a love sick hero Werther, (in contemporary terms, someone so obsessed with his passion for the heroine, that therapy or a jail sentence might be an aid to his “stalker” condition.) and a heroine so distressed by her burden of duty (Charlotte), that obviously, only tragedy will ensue from their knowing each other. Like THAIS the plot is reduced to the “pagan” urge of attraction, love, in conflict with duty, with God (probably the Catholic one) looking down upon them with a threatening moral brow. Silly, but perfectly suited to the theatre and time of its creation, Europe (),1892. Today the audience will have to give a benign bow of the head of plot indulgence to take it seriously.

However, the music, as I have declared my prejudice, is beautiful. There is something dramatic yet shimmeringly transparent in its sound that gives me a restful and fanciful mood of romantic and dramatic longings. Romantically lush and imaginatively transporting. It is often so. I am sure the musicologists can more eruditely explain what the effect is, and have. The third act and fourth act are almost a trio for the two leads and the orchestra (conducted by Emmanuel Plasson.) It is thrilling. The musical performances of the two leads Aldo Di Toro (Werther) and Michele Losier were gripping and powerful. The dramatic performances were truly awful. More of that in a moment.

This is a handsome looking production. Originally presented in June of 1989. The set and costumes are by Michael Yeargan. The setting has been transposed from the original to, I guess, 1989. The clothes have been provided by Leona Edmiston and Farage. The intention of the Original Director, the great Elijah Moshinsky seems to have been an attempt to a contemporary (post modern) naturalism. The Director of this Season is Elke Neidhardt. She has managed to move the singers and children, props etc around quite well. What she has not managed to direct is the two leading singers into an acting style that is acceptable for today’s audience. The acting especially in Act three and four is the kind of acting that gives Opera, as a form, a bad name. It is the kind of acting that forms the basis of all those disrespectful sketch shows and cartoons.

The third act has a dining room set of maybe ten chairs around a table and I swear to you that both singers clutch the back of every one of the chairs and the couch and the walls during the beauty of their singing. They also manage to touch almost every part of their own body in the “anguish” of their character’s problems. Why didn’t Ms Niedhart simply ask the singers to reduce the externalising of the physically expressive impulses? Why weren’t they guided to simplify and just stand and sing and let us endow the dilemmas from the cues in the music? For, it was ludicrous, and on purely contemporary standards of opera acting, way over the top and harking back to a time of yore, that I have rarely witnessed in any opera house.

Ms Neidhart also allowed a white shirt that the hero was wearing, in the fourth act, to have a blood stain in the front so palpably fake in colour, and on the back a similar choice with the addition of a blacked circular pattern, that I read, as a self inflicted gunshot. The size of the exit wound looked as if Werther had shot himself with a cannon ball!!! Surely Ms Niedhardt who may not have been able to manage the singer’s acting could have at least have the wardrobe department give the singer a more realistic representation of his wound, that looked as if it were fatal, but still allowed the character to sing for a further forty minutes without it being risible (The audience did laugh, momentarily.) This was just plain ridiculous. Ms Neidhardt in the program is presented as the Director of this set of performances. She is not credited with re-staging, it is the direction that she is credited with. Bizarre. The acting from Ms Losier as Mr Di Toro crawls agonisingly to his bed, on the floor, is from a Greek tragedy from a production of the 1950’s, perhaps. (By the way the poverty of Werther’s apartment struck me as odd as well.)

If these two singers and if the Massenet score in these two acts had not been so wonderful, the response to the night would have been catastrophic. Sarah Crane (Sophie), Stephen Smith (Schmidt), David Thelander (Johannn), and Andrew Schroeder (Albert) were persuasive in their acting and singing.

This experience, to finish the present Summer season, is the antithesis to the LADY MACBETH OF MTSENSK. But both for different reasons were good to have seen. MTSENSK for the wholeness of its artistic achievement WERTHER for the look of the production, the music and singing.

Posted by Pearly Productions at 10:51 PM