I Love You, Bro 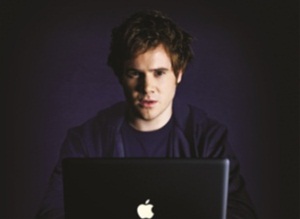 I LOVE YOU, BRO by Adam J. Cass, is a monologue, performed by Leon Cain and Directed by David Berthold, at Riverside, Parramatta. This production is a revival of the original, given last year, at the La Boite Theatre, in Brisbane.

Another monologue! (see MALICE TOWARDS NONE)

This monologue, however, has the ultimate ability to draw one in completely. It is skilfully told by Mr Cain and concerns an intricate, some might say, labyrinthine, Internet virtual world, sustaining a length of some 75 minutes, or so. A simple but elegant Set Design, by Renee Mulder, suggesting a blue screen of the computer, sometimes with computer text and live action projected onto the surfaces (Visual Design: Jaxzyn), is inhabited by a young 14 year-old boy, 'hiding' from a dysfunctional broken, working class new unit (mother's boyfriend), downstairs.

Self locked in his room, the young man begins, anonymously, Internet conversation with another guy, a distant schoolboy football acquaintance, whilst pretending to be a woman, and gradually inveigling the other to strip off, on camera. The sexual tensions become involving and to maintain them, which our young hero desperately wants, through the Internet, a whole set of other persona are invented in more and more convoluted twists and turns. It results in an actual meeting which ends in an attempted murder.

It sounds preposterous? Well, it is, like TRUCK STOP, based on a true story! believe it or not. Truth stranger than fiction.

The moral turpitude that the young man finds himself in, signals an alarm bell of concern, for today's sociological cultural health. The failure of the family unit, or other, to guide, attend to this young person, and assist him, through what was once a pretty normal time of 'rites of passage' , of growth from child to adult, in this case boy to man, unlike the TRUCK STOP, girl to woman, is being brought to focus, again, for us to deal with. Our hero claims many times in his retelling of the triumphantly remembered episodes, that at last, after all the dramas, to have become, a SOMEONE - a 'being' of consequence. The delusion is sad. Dreadfully pathetic in its sadness to contemplate. A sad pennant, for the future to read of, flying in the desolate winds of our times.

Mr Berthold has created a tight and compelling production (the lighting Design by Carolyn Emerson, of some useful note).

The coincidence of seeing, so soon to one another, the worlds of I LOVE YOU, BRO and TRUCK STOP, is exhausting, despairing. Other performances that come to mind include AFRICA and more recently, COMPUTER BOY, and they, too, add to the heavy weight of the issue.

P.S. The background world of all the above plays is that of a working class, socially underprivileged culture. However, the origins (the true story) of the I LOVE YOU, BRO story concerned a young man from a well-to-do middle class family. The boy having all of the advantages that money could have provided. That it doesn't advantage him, is, sociologically, no surprise. That Mr Cass did feel the necessity to change the background story of his theatrical protagonist is interesting. Does the working class morass have more cogency than the original background for an Australian audience? I wonder about the choice.

Dominic Cooke who has been the recent artistic leader of that legendary 'bolshie' new work theatre company: The Royal Court, decided in his artistic directorship, to shift the background of some of his playwrights' worlds - so preponderantly, working class/underclass: poverty, dysfunctional working class family relationships, drugs, etc - to bring some focus to the moral bankruptcy of the privileged class as well. That was, indeed, the source of some of the moral shock and power, courage, of Polly Stenham's THAT FACE and Laura Wade's POSH. I wonder what the added weight would be if girls from an inner city school, say, S.C.E.G.G.S or St Vincent's, Sydney, had a sex-for-money adventure (It is in the Cross, and handy for such opportunity, I would've thought!) , or if a boy from Point Piper or a G.P.S. institution used his computer literacy to invent a sex life and infatuation with an innocent fellow schoolmate, that led to an incident of attempted murder? Hmm!!! Too far fetched, I guess.

Dreams of the Australian writer catching up with other worlds, I fantasise?

The working class don't go to the theatre - "too boring" or "too expensive" - so let them be the regular ,critical mirror, social reflection. Best not to disturb the regular audience, comfortably middle class, with a mirror that might, just might, reflect their worlds a little too honestly? They may not come, back.

Its not what the Royal Court found. But then, of course, "Ah, that's London, not Sydney."