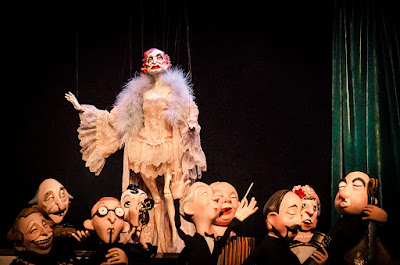 Sydney Festival, present THE DAISY THEATRE, from Ronnie Burkett of Marionettes, Canada, in the Reginald Theatre, at the Seymour Centre, Chippendale. 6-28 January.

Ronnie Burkett is a Canadian Artist who has for the last 30 odd years been the leading 'light' and inspiration for the Ronnie Burkett Theatre of Marionettes, and has over that time developed enumerable full length productions for which he has Designed the Marionette, Costume and Set, and single-handedly written and performed with extreme physical and vocal virtuosity, in each of them. (P.S. He does have help: for instance, the Music and Sound Design is by John Alcorn; and the Stage Manager is Crystal Salverida.)

The Marionettes are exquisitely rendered 'figures' and with the extraordinary gifts of Mr Burkett are endowed with impressive individualistic personalities (and voices) that are able to engage an audience easily in their function and point-of-view in/of the world, which is mostly, mildly, irreverent and dexterously, gently, subversive in nature, and yet, are also reassuring that the ordinary human experience, that includes old age with all its difficulties and hard won wisdoms, is normal, and is to be met with patience, if not a possible optimism. "Keep your fork, there is cake.", says Edna Rural, a folksy relic of the Country-Women's-Association type in Alberta, Canada, late in the show. The shows are for adult audiences and THE DAISY THEATRE where we meet a range of personalities hanging about a 'stage' is a delight.

The age old tradition of the marionette and or puppet theatre could seem to be an archaic relic of a past gone era in this modern world of electronic interconnection, and yet I can only comment that the joyful participation of all of the adults in the Reginald Theatre (orchestrated gasps, sighs, applause) where their imaginations were invited and put to work, inveigling from them enough free commitment for active interaction for the almost two hours of the performance (one gentleman took off his shirt, voluntarily, and played the dead Romeo for some time with an ancient Shakespearean 'actress' for our delirious amusement), was proof that the magic of artistry is timeless, whatever the 'form', and that there is an appetite for it that transcends our claim of sophistication in the blasé indulgence in the computer generated images and manipulations of much of our entertainments in the 21st century.

What sometimes may escape the acknowledgement of the audience because of the dominant 'power' of the marionette personalities is the genuine 'genius' - let alone stamina - of Ronnie Burkett himself. He is truly an awesome artist.

While watching one may recall one's own forays into the 'puppet' theatre as a child - never had the marionette strings in my hands, unfortunately, just 'glove' puppets - and the childish pleasure of viewing Amanda the Cat on old Channel TCN 9 with Desmond Tester, or, of the Von Trapp family and their goat-herd show in THE SOUND OF MUSIC.

There is time for you to catch the show and I think it is a lovely thing to see and participate in. It is not all whimsy, there is some strong intimations around some modern dilemmas, just to keep you on your toes and relevant.