The Things Good Men Do 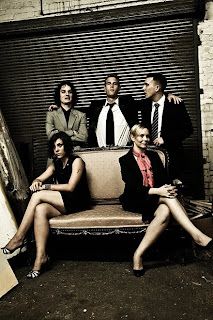 Dominie Drama in Association with Come Again Jnr. Presents THE THINGS GOOD MEN DO, written by Dan Muirden at the TAP GALLERY, DARLINGHURST.

THE THINGS GOOD MEN DO was written in 2007. The play concerns Nick (Chad Richards) who along with his best friend Joe (Chris Leaney) are leading the good life in, relatively high flying incomes and a life style that is fundamentally morally indulgent and fancy free –alpha males as full-bore sexual game players and/or predators. We may have been there ourselves a few years ago, or certainly know of others who have been. But Nick at thirty, his Saturn’s Return, has found a true love, Lucy (Anna James) and wants to get married. Unfortunately for him one of his female gamesters of recent past, Adrianna (Stephanie Pick) is not playing by the rules and has developed an unhealthy obsession for Nick and got/found herself pregnant and dependent on her fantasy life with Nick, and inconveniently breaks into the cosy picture-perfect ,middle class dreams of the protagonists. Secrets discovered inopportunely can be devastating. This is the play’s lesson for Nick. It can be warning for us. As the program proclaims “There are three types of girlfriend. Those you tell your parents about, Those you tell your friends about, and those you tell no one about.” Adrianna is one you would tell no one about. One, where once should have been warning enough for a less selfish male.

The production of this play is absorbing and mildly funny. Funny in that the comedy is chiefly found in our cautious identifications. The drama is scarifying and possibly very near the bone for some. Although the character of Adrianna seems to be drawn from the same genetic pool as the heroine in FATAL ATTRACTION, this production of the play compelled me to stay with the moral stupidities of the Nick and Adrianna. What kept me going were the very convincing performances from the actors (Including Jeremy Just in a series of cameos, especially Rich). Chad Richards, in a very difficult role is utterly convincing, as is Chris Leaney. The dialect work is very impressive and compelled me to believe the world they were in.

The producers of this play COME AGAIN JNR., Anna James, Chad Richards, and Jeremy Just “met through acting and were frustrated by the lack of theatre opportunities for young actors in Sydney. Instead of sitting around and waiting for work to come to them, they decided to create their own and so began the process of producing THE THINGS GOOD MEN DO.” They found a play, bought the rights, found a director and have got on with the job. All of the actors have studied at the Ensemble Studios, as recently as 2009 and this is a very creditable evening.

Obviously this is a production built about either a minuscule budget or none. It is a poverty production. There is no set, the lighting is serviceable: to see and contain spaces; the furniture is basic, what one needs to do the play, no more. The props are realistic details and the costuming is well thought out. The director Nicole Selby has done a very good job and the play mechanics in this limited space are simply solved, the acting and the tempo of the scenes and control of the actors well staged and drawn.

I was not sure what the night might be. However, it turned out to be a very easy and pleasant night in the theatre, within the artistic license you may need to give it. If you have the time I recommend that you support another independent theatre company and project. Certainly the acting sustains and entertains in a piece of writing that will provoke debate. The reviews in London seemed to underestimate the play and its possibilities. That may have been the production there. Here, under the hand of Ms Selby, although the characters may provoke disbelief on the page, they are briskly and skilfully drawn in this production (with occasional license given) and worth meeting even as a warning. The play was written before the global financial crisis and the character’s indulgences, today, seem to require a sense of fair justice. It is served up to them most satisfactorily. I had a relatively good time.
Posted by George Khut at 9:03 PM