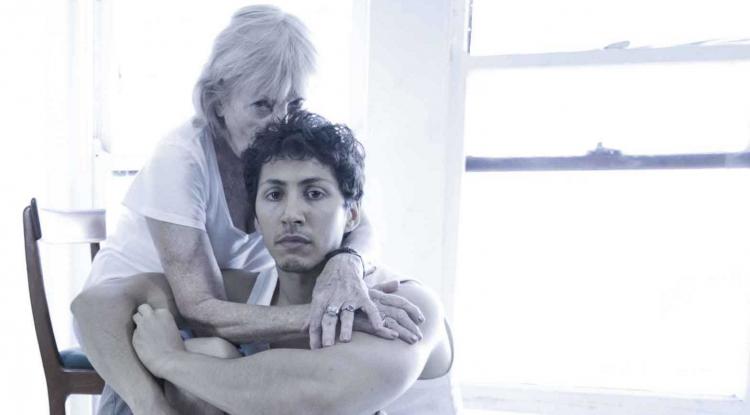 MopHead Productions and Catnip Productions present 4000 MILES by Amy Herzog at the under the Wharf atyp space, Hickson Rd.

4000 MILES by Amy Herzog, won the Obie Award for Best New American Play in 2012 . The reputation of the writer and this play had preceded this production under the wharf in the atyp space.

It is a 'little' play dealing with the intergenerational relationship, today, between a 91 year old, ex-communist activist, Vera (Diana Mclean), living in Greenwich Village, New York, and her grandson, Leo (Stephen Multari), a young, slightly committed to alternative-living 'hippy', who has just completed a 4000 mile journey, by pushbike, from Seattle. He arrives at 3am in the morning and the ten scenes of the play span a month or so, as the two of them re-acquaint, and he sorts himself out - a traumatic event that happened during the bike ride appears not properly dealt with, and he has an ex-girlfriend who is now living and studying in New York, the relationship also not completely resolved, it seems. Vera and Leo have the communality of 'blood relations', and in their history of the extended family pool, have sometimes, agreements about them, sometimes not. But, it is family and each deal with some of the 'oddities' of the other with all the forbearance that that brings to personal interactions, which if they were not blood related, they might otherwise, not do. This leads to some very amusing non-sequential conversation and actions and into forceful expressions of emotion that roll off each other, without real incident or profound injury, like water off a duck's back, all woven by the interaction of the physical naturalisms of extreme age on one hand, and, robust and maturing youth on the other.

I had read the play and pondered its reputation. It is a 'cute' play on the page. I thought, "mmm". I thought, to lift this work into a prize winning one, the acting needs to be very detailed, carefully nuanced and each scene played within an accurate naturalistic time control. It requires a kind of uneventful but deeply observed and, finally, experienced, breadth and breath of knowledge of character and, especially, family, psychological intimacies. It needs to be 'conducted' by the director with all the trust to the real time, naturalistic clues, that Ms Herzog had given out. It requires almost non-acting and the illusion of the non-dramatic unfolding of living. Chekhovian, perhaps. It is a very deceptive but wonderful piece of writing. Difficult to do.

Some of this is achieved in this production by Anthony Skuse.

The design (Gez Xavier Mansfield) though attractive (lighting, by Sara Swersky) - if without enough books and dust - is on a raised platform, and so the 'living-room' where most of the action takes place is visually, and practically, like a floating island - it does not have connection to the rest of a real apartment; there are no doors or stairs, no light switches etc, for instance. This means scripted exits to the kitchen or other rooms are curtailed - the time lapses of action/activity that would have taken place are consequentially hurried, the musical pacing of Ms Herzog's creation lost. In this production's instance the other actors, sitting around the set, come to the 'shore' of the living room with the cups of coffee and possessions etc. to give or take, for the flow of the naturalistic action of the activities of the play, with usually an unscripted, added verbal exchange from Vera, that takes the work out of the play's indicated style to that of a Meyerholdian conceit - this is a play and I am an actor, so are they, and you are all in a theatre -  instead of the Herzog/Stanislavskian desire for it all to be believed as a living reality.

Ms Mclean gives, mostly, a secure and believable performance but details of Vera's aging frailty: not picking up on the door key note of scene three and the 'ginger' and shaking hand with the cup of tea in scene four, and still successfully threading earrings into the hole of her ear , in a later scene with ease, seem to be careless choices of missed opportunities of character exposition and exploration through use of sustained characteristics indicated by the writer. The writer's clues, if followed through with consistency, may have had more subtle impact to the characterisation. (It is simply a 'close' reading of the text for inspiration and guidance.). It undermined partly, my belief in Vera as a character, and took me back to a theatre place rather than watching a lived life. Similarly, the casual everyday costume, the white deep scoop necked blouse, needing to be constantly dealt with around the chest, alluded to a sexual predilection, a blowsiness, rather than the 91 year old political savant, intellectual, underlined in the text by Ms Herzog - with the aid of mind altering drugs, Vera, reaches back to sexual longings which weren't too apparent in any of her relationships in life, she tells us, and, age of course shifts the focus of life priorities, and sex, in this text, for Vera, at 91, is not too high on her priorities.

However, Vera, is the secondary character in this story, dramaturgically the sounding board for the development of the arc of the journey of Leo. This is his play. His subterranean journey of emotional immaturity and the consequences of that, in and to his life, is the 'stuff' of the play. It is not really indicated by Mr Multari. There is little readable clue from the actor that something other than the literal action of the text is going on. There is a sense that Mr Multari believes that theatrical energies are equal to informative acting, storytelling. Occasional sentimentality, commenting on his material, playing personality, is the usual choice, rather than plumbed emotional truths and courageous personalised revelations. The grief of the bicycle trauma was not seen, and so this Leo is a very unpleasant young man, though physically robust, he is emotionally ignorant (or, was this performance just first night nerves?) The scenes with Vera which makes up the bulk of the play, on the night I attended, were held together, mainly, by the wisdom of Ms Mclean's mature offers and responses and they worked, generally, in sync with Ms Herzog's intentions. Mr Multari, however, does not know how to use the opportunities of the scenes with the two younger female characters, Bec, his ex-girlfriend (Eloise Snape) and the bar pick-up, Amanda (Aileen Huynh), which he must drive, and set for the audience, the inner agenda, to reveal, further, the complication of this young man's emotional inadequacies, his utter, utter selfishness. The level of storytelling by Mr Multari in those scenes is relatively superficial, and the scenes seem, consequently, to be almost superfluous to the construct of the play, no matter the good performances from Ms Snape and Hyunh in creating them. The dawning of emotional awakening, growth in the last scene, when Leo, independently, elects to commit a positive, unselfish action, the first in the play from him – the writing of the obituary speech, for the unknown neighbour - does not have an actor's awareness of the significance for the character.

This production is almost two hours in length and has no interval – concentrations lagged and I believe this production could have done with one.

John Shand in the Sydney Morning Herald (Wednesday, 8th May) was mightily moved by the same performance I saw and did not have the reservations I have about this production.