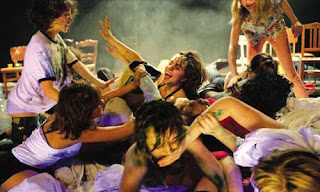 Sydney Theatre Company presents Ontroerend Goed, Kopergietery & Richard Jordan Productions Ltd ONCE AND FOR ALL WE’RE GONNA TELL YOU WHO WE ARE SO SHUT UP AND LISTEN at Wharf 2.

13 Flemish teenagers, 4 young men and 9 young women, aged between 14 and 18, are the performers in this hour long theatre piece demonstrating, after investigating, in a long process of devising, the alarming volcanic hormonal brew of the grey and the growing white neurons in the growing brain and the spectacular consequences of such a volatile mixture of interaction in the physical and psychic gestation period called adolescence.

Adolescent: in the process of developing from a child into an adult. (Neuron encasement takes place!!!)

It is the wonderful theatrical contrast of these obviously robust adolescents, in different phases of the trauma of the body and mind change, who having explored various episodes of behaviour under the guidance, at least supervision, of an adult team, particularly the director, Alexander Devriendt, who have now surrendered those dangerous urges for a very structured piece, in which they manage to recreate an abandon that looks chaotically spontaneous and, yet, has such craft and art structure.

When we enter the auditorium there is a cacophony of noise that immediately awakens those memories of the school playground. The rough-house, haunting, slightly terrifying cries of the unbridled and self encouraging and kindling nightmare conditions of the provoking teenager, echo in stereo across the stage from the black draped wings. The call, the warning of the primitive edge of anarchy ripples and the predicted horror of William Goldman’s THE LORD OF THE FLIES dominates the atmosphere. Depending on your own adolescent journey you can respond in recoiling horror or laugh fondly at a time that is now relievedly in the past. (In the past, TENSE.)

It is literally a black space that we see with a mixture of 13 non-descript, but individual, chairs lined up across the centre of the stage – each a different colour, shape, design, comfort factor etc. Like the 13 ‘adolescents’ each chair has its own distinct personality. One of the company comes on stage, steps over the front lighting equipment, seemingly flirts with us and then introduces the project we are about to see. She steps back into the “playing area” and is joined by the rest of the company all accurately and realistically dressed (Costume and Set Design: Sophie De Somere.) (This technique/pattern of the contrast between the individual conversation with the audience and the step back in to the company explosion is the repeated directorial motif.) They sit on their chairs and interact in the manner of each personality and at the same time begin to interact with each other. Teasing, flirting, jeering, annoying, swatting, hitting, laughing, feeling each other, flicking deflated rubber balloons at each other, tumbling over in their chairs with screaming laughter and feigned terror, multi-coloured chalking of the floor with catch phrases and drawings, entangling each other in string and taunting each other with sexual innuendo, stripping off a pair of panties and hanging them on the string, spitting water over each other, playing with plastic cups, building a pyramid out of them, having it destroyed by a swift kick from another of the “tribe”, a skate boarder crashing and hurtling over a group of crouched friends, two others in a tube of a double ended black plastic bag: crawling in and probably kissing, their legs sticking out the end, registering possible joy or agony, etc, etc. From the order of the line up of chairs we descend into chaos, a kind of HELL!!!! (depending on your own memories) – physical and vocal NOISE!!! This is accompanied by a blindingly apt soundtrack of pop music (Sound Design: Stijn De Gezelle. Music across a range from Delibes’ LAKME through Radiohead etc- all terrifically chosen.) A warning horn, like that used in a penitentiary, maybe, blares out a pulsing signal and each of the group clear, clean the space and place the chairs back into the ordered row that we began with. The performers leave the stage. All is restored to quite and order, just the unique collection of individual chairs warmly lit in a contrasting blissful zone of peace. (Lighting Jereon Doise) Then the sequence is repeated, and here is the cleverness, but slightly differently, barely noticeably: it is spontaneous but ordered. The stage clears again. The third time it recommences with the actors giving the directorial, objective instruction. It has become art, carefully crafted. The young actors explicate this with a slightly indicated sense of sneer and cynicism at order being imposed on their actions and hi-jacked in this way. Order out of disorder. Adult supervision. But clearly, deep down they love what they are doing.

What follows are a number of sequences that examine, the abandon of the tribe to the heat of the beat of the music; the animal biological abandon of the power of burgeoning sexuality; to the ecstasy of altered states, of drugs; the grasping of the power of destruction; the gathering maturation of choice and its possible consequences: all the lessons of adolescence, of which most of us learn and survive into a civilised adulthood and others, a few, do not. This is a very real exploration of this period of some people’s lives (– not all, of course, my personal travail through this period was relatively sedate and hardly recognisable in this work and I could reflect, either, as our introductory host admitted, with recognition and a sense of regret of now being old or with envy.) The final sequence is a magnification of all the objects thus used so far, everything is on a bigger scale and the resultant mess is catastrophic and hardly able to be cleaned up swiftly-it has the affect of poignancy and caused pause about the events I had witnessed. A nostalgia for a time in my own experience when life was freer, more abandoned, perhaps, more fun. But then the company take a triumphant curtain call (my audience ALL stood to express their appreciation – a rarity in Sydney theatre going etiquette). The house lights restored. Then, immediately, this company returned to the stage and began the huge necessary restoration of order on the stage accompanied by the adult support team. For some in the audience this was continuation of the performance, certainly, it seemed to me to reflect the responsible maturity of these growing or grown adolescents guided by supporting adults – we are in this together. Like in the recent Shopfront production SUPERPERFECT I saw out in suburban Sydney, Carlton, I saw the empowering communication of the arts for the young in the community. It is also what I saw and felt out in Campbelltown with THE RIOT ACT earlier in the year.

The difference here, is a very tight and slick Festival Circuit event that has had a long gestation period and quite a number of performances. It was a very inspiring event. No less than the other two that I mentioned, just supported differently. At the Sydney Festival Ontroerend Goed presented THE SMILE OFF YOUR FACE- an interactive, and it, like this project, was an original and welcome experience to the Sydney Theatre calendar.

Playing now until 29 August.
For more information or to book click here.
Posted by Pearly Productions at 1:13 PM