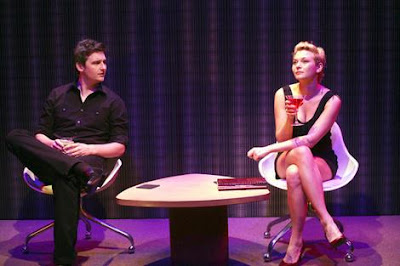 SATURN’S RETURN was originally commissioned and first produced by Sydney Theatre Company for its Wharf 2LOUD program. The first performance of the original season took place in August 2008. A year in development since then. Mr Murphy has had a year which has included the play being “workshopped and performed in a rehearsed reading at the National Studio (London)… and a secondment at the Royal Court…… I benefited from stepping away from the play to gain some objectivity over its shortcomings but also its inherent mechanisms. I knitted new links between the scenes and threw out the old ending.” In fact quite a considerable amount of re-writing has gone on and it appears to me almost a different play. A better play.

The journey of the protagonist of Zara (Leeanna Walsman), from the moment of her hesitation over her commitment to “I love you” in reply to Matt’s (Toby Moore) declaration “I love you” in the first scene, is now the clear development of the play. This is Zara’s play now, not a shared one with Matt. Matt, as a character, becomes part of the mechanism with Brendan for Zara’s story – not a joint focus.

In the midst of her astrological time zone of "Saturn’s return" (her 29th year), confronted with her free wheeling hedonistic life experiences and a need to commit to a LIFE plan, maybe children, at Matt’s urging, Zara is spun into a mind/space trip. This new play now takes us into a warped mind journey of personal issues all impersonated on the stage. The play is Zara’s mental struggle through her decision making angst. The audience is whisked into a series of episodes that become more and more “demented”. Events, people and pop–life backgrounds are thrown into the mixmaster as the Set (Adam Gardnir) – in construction, looking as flimsy, as the early series of DOCTOR WHO - spins like a whirling disc/capsule through the super-hyped confrontation of life/space needs, accessorised with the clumsy early 'Doctor Who' flashing of primitive lighting effects (Luiz Pampolha) including the star /universe on obvious black masking. In the program notes the Director (David Berthold) quotes the writer Douglas Adams and I think "…ahhhh, THE HITCH-HIKER’S GUIDE TO THE GALAXY....... AHHHHH, I get it. The space man costume, looking like a kid’s home made kit; the invisible gravity boots etc. AHHH, yes! DOCTOR WHO. RED DWARF etc."

Mr Murphy has still the glittering surface of our cultural ‘branding’ issues: yoga, drugs, sex, alcohol, cancer, dementia, soundproofing, home deposit/mortgage etc and peppers them minutely but accurately, humorously, into the speedy, stylistically comic repartee that were a feature of the last version of the text, but this time with a much clearer structural vision. The play is now less sociological (Not so much the Gen “Y” comment), more psychological ( more personal). (It is a different play.) The pity is that in between the last production and this one, THE WONDERFUL WORLD OF DISSOCIA, has also appeared on this very stage. It too evolved from a young woman having to deal with her need to confront her relationship with her partner, it too threw her into a mental space of absurdity. We are on very similar territory. What this play does not have is the reality of depression. It is only half the world of dissocia. Of course in this play we have a healthy young woman who, no matter the stress of the decision, can ultimately make it and, seemingly, will move on.

Not only has there been re-writing but also re-casting in this new exploration. Matt Zeremes who last time created the husband, Matt, now tackles the friend, Brendan. Mr Zeremes seems to be more comfortable with the tasks and subsequently more successful. In the husband role, Toby Moore takes over, afresh. There is great technique, especially comic, but there is a tendency for the characterisation to be glib, lacking real depth. But, then, this was my response last time to the casting in this role (Mr Zeremes, as Matt).

Ms Walsman is still playing Zara/Mary. Ms Walsman makes a fairly successful Mary. My observation is that the disguise and dialect of the Dutch whore, Mary, provides a mask for Ms Walsman to relax and express a wider range of responses in her story telling kit. Zara, the principal role is not as successful. It seemed that the playing of Zara without costume or dialect masks was a much more difficult task to execute for her. Playing so close to herself, maybe, creates, unconsciously, an inhibition, in the theatre? The scale of expression in a vital need to reveal, that any truthful acting demands, maybe too daunting? It is, certainly, less believable. The vocal work is forced, breathy and repetitive in its sound. The characterisation lacks physical detail and freedom and a kind of blandness begins to permeate the choices. It is television acting. (It is self concerned and the camera shall catch the detail with the right distancing or angles.) It has personable charm but the work does not accumulate substance. Each scene is ok but the picture as an accumulating journey less so. The dilemma of the character is as coolly ascertained at the beginning of the play as in the last minutes. There has not been a driven accumulating objective. Each scene is ‘Brechtian’ in its ‘presenting’ of character in a state of ‘crisis’ not actually in ‘crisis’. The performance is mismanaged in its affects of communication for the theatre. Part of Mr Moore’s problem maybe the lack of active give and take between him and his co-lead. Here, for me, is where the problem lies. Mr Berthold, although dramaturgically on top of the play does not seem to be able to guide his, twice, leading lady to a more satisfactory solution. And this is where the play flounders in its impact.

RUBEN GUTHRIE, at the Belvoir, has also had a second ‘bite of the cherry’- a second airing, with more or less a year for new development . The writing changes in that play were not as radical as Mr Murphy’s. In fact, the monologue riffs of Ruben still dominated the achievement of Mr Cowell. The scenes still fairly unsophisticated in their character and plot development. The jokes just as strong, balanced, precariously, with the seriousness of the issue of the play: alcoholism. Structurally and technique-wise nearer the David Williamson model than Mr Murphy’s play. (Mr Cowell nowhere near the sophistication of the complexity of the ‘musical’ structures underpinning Mr Williamsons achievements, yet) The Design was expanded and more handsome and with a keen and elegant set of solutions. The re-casting was certainly stronger than the original production Downstairs (in all but one instance). It was, however, blessed, both times, with a powerfully charismatic central performance by Toby Schmitz that carried any carpings one may have had, over the writing.

SATURN’S RETURN has had a very thorough re-development by Mr Murphy. It is a radical re-construction. The bravery of this, I believe pays off seriously well. Here is a very seriously concerned artist at work. Engaged and thoughtful. It is always difficult to fully gauge these changes (I feel, for instance, that the first published text of Sam Shepard’s BURIED CHILD is a much more interesting one than the re-examined published text of the Broadway version. The first version was more ambiguous. The second too obvious. [Imagine the difficulties when deciding on which edition of a Tennessee Williams play to use. He was so obsessed with improving his plays and then with the opportunity to adapt with freer censorship rules and acceptability, as productions were mounted over history that he never stopped fiddling , however incrementally. Which "STREETCAR" will we see?]) What has been gained, by Mr Murphy? What has been lost, by Mr Murphy? Debatable. The set design is more realistic, flimsy, less whimsical. The costumes present a less upwardly mobile citizenship in this version. The re-casting, maybe, has not got gone far enough. Debatable, again. Certainly, the central performance of Ms Walsman does not have the same force to be reckoned with as Mr Schmitz’s did in RUBEN GUTHRIE.

It would be interesting to see the next incarnations of either of these plays. Fresh eyes. Fresh inputs. A whole harnessing of new creativity. It is the maturing of the writing process that both Belvoir and The Sydney Theatre Company have taken responsibility for. This is truly nurturing the writer’s growth. More of it. It is a risk take but a laudable one in my estimation. POOR BOY could have benefited from that activity. (I hope the new editions of these two plays are published to put beside the originals, for history’s sake.)

Playing now until 30 August.
For more information or to book click here.
Posted by Pearly Productions at 2:34 PM