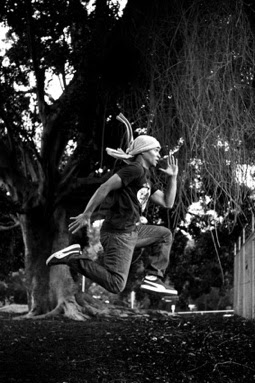 MOVING PEOPLE, a production from Westside Publications, in association with the Sydney Writer's Festival. Produced by BYDS (Bankstown Youth Development Service) at the Bankstown Arts Centre.

Simply, standing in front of a projection screen, sometimes used to accompany the work with images, sometimes not, with a readers stand and a microphone, these writers read for us either poetry or prose/poetry. Their latest work. Directed, jointly by Michael Mohammed Ahmed and Felicity Castagna, Chief Editor and Sub Editor of Westside Publications, produced under the auspices of BYDS the performance was simplicity itself. The house was full.

The original works by these young writers covered a wide range of subjects and preoccupations. There was comedy, drama, pathos all peppered with the power of truths. Of an expression of lives lived and observed.

As performance I was struck with the authenticity of the material and even more especially by the sound of resonant honesty. I was greatly disarmed and had a very good time. Published these works will be well worth having, but, I felt a recording of the writers would hold the theatrical magic as a great measure of the experience, even more so.

The story and sound of Tamar Chnorhokian and her work experiences began the night with the right sense of information and humour, balanced with a witty irony. Peta Murphy and her telling of the woes of shared living, gathered remembered details, that were continuously mesmerizing and horrifyingly vivid. Randa Sayed with her simple private story of cultural difference was enhanced with a delicate and deeply felt emotional commitment of voice/sound. The story's poignancy was touching and illuminating. Nitin Vengurlekar, on the other hand, with simple and amusing drawings and a slightly super-cool demeanor delivered a series of poems that were deceptively comic, cumulatively subversive. The final verse a shock of ambiguity, shot through with a tinge of real anger.I was uncertain on how to respond. Michael Mohammed Ahmad concluded the night with a very polished piece of writing, again amusing and insightful. My companion found other stories more compelling. We had an animated discussion on the train home, talking of all of the work and appreciating the differences and the reasons for our different preferences.

The Bankstown City Council, have begun to reap real proof of the valuing of the multicultural communities it serves. This program and the Arts Centre as a place to gather to share our lives together through writing and performance in this case of MOVING PEOPLE, a visceral and rewarding experience. More than one performance would attract an audience with a similar capacity and approval, I reckon.

Great. It was my only event at the Sydney Writer's Festival and I loved it. Thanks.
Posted by Editor at 11:32 PM